So I already told you this was going to be a very busy year for me didin't I? This is my first 2017 update. A little earlier than first planned, only just shipping Viper, but what the hell we all love a update right? (Well I know you look forward to Popp's, Stickman's, Strijbos, Fuller's, Pelikan's, Young's, and the list can go on & on & on) but I'm in there somewhere I'm sure (hopefully!)

I have been wanting to try and build a fit together/ Burr puzzle for sometime, I was in discussions with Lee Krasnow a long while ago and he advised me that I was free to make any of Stewart's designs without his permission. I don't have Stewart's email to discuss this with him, and Lee told me he didn't like to be pestered, so I hope he is ok with my take on his design !

Lee also pointed me to John Rausch's fantastic website where I could find all the plans I would need to make some. I also researched an (old) tutorial Lee had made on how to build the jigs he has to do the work he does (did?) as well as other videos by other craftsman.

Lee thanks again for all your help & advise, also to all the others that have taken the time to upload videos to help others like me as well as to other craftsman (Scott Peterson, Neil Hutchison, Mike Toulouzas, Stephen Chin, Kelly Snake to name just a few) that allow/do videos. Thank you all.

Also another thank you to Peter Wiltshire that advised and helped me on the finish awhile ago. I'm still using that technique, I really love that finish. Cheers Peter!

After visiting Laurie, and seeing he's passion for this puzzle I decided this was going to be the one I made. Because of this I have chosen to call it 'Laurie's' Three Piece Block puzzle, with Laurie's blessing. I can tell you Laurie does have his copy, and has enjoyed/approved my little take on the design. No problem for the man that sat beside me at Peter's EPP eating a plate of Katja's lovely food, while solving a puzzle Peter has that us mere mortals would take weeks to do! Approval from Laurie (and Ethel) is like having a royal approval (they have the contacts) so I'm VERY happy with that.

The construction is not as good as the true masters before me, including, Stewart Coffin, Eric Fuller, Scott Peterson, Pelikan puzzles, Brian Young, and Brian Menold to name just a few. There are plenty more I know, and I bow before you getting the accuracy down so well. I do not have the patients for that !!

I hope you enjoy my take on the design, with a little Halespuzzle sauce, even if it cannot compare with the real masters. After all it is a first attempt !!!

Only two versions will be made in this Zebra wood. I will also be making a few others in differnt woods, every joint has been dowelled for added strength.

Limited to around 10 copies (patients permitting :-) 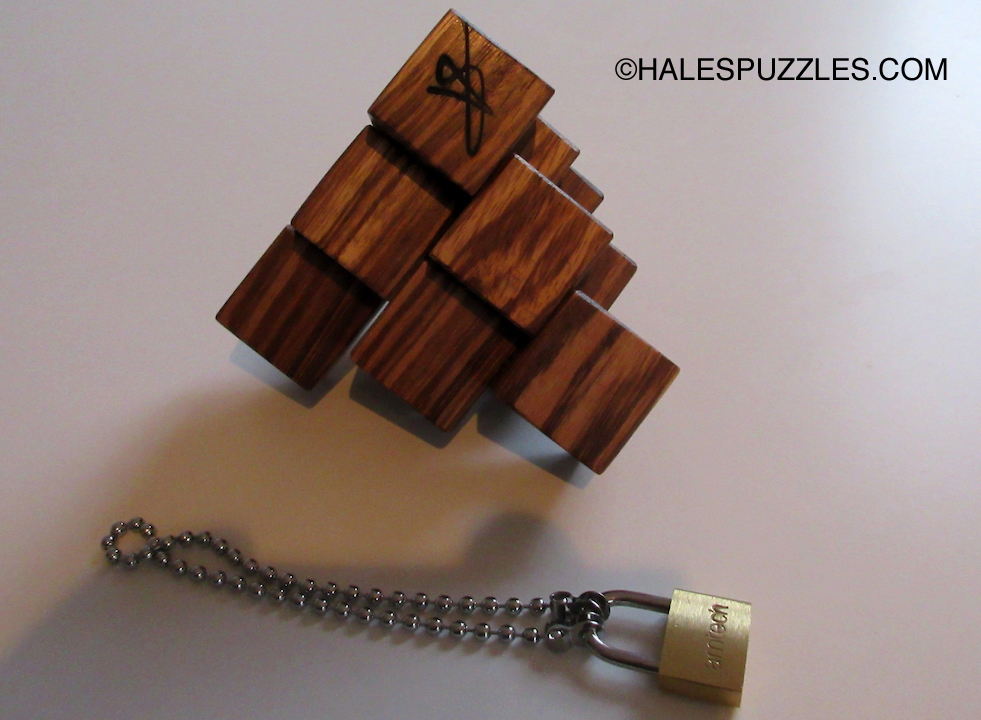 A special and secret thank you must go to Peter Hajek's puzzle room, in which is filled with absolutely everything you ever wanted, here I broke into the puzzle room at EPP, found a copy of Three piece block puzzle, took it to pieces and photographed the steps, without that I'd still be trying to solve this puzzle and trying to work out if I had actually constructed it properly (first attempt I didin't!) please don't tell.......